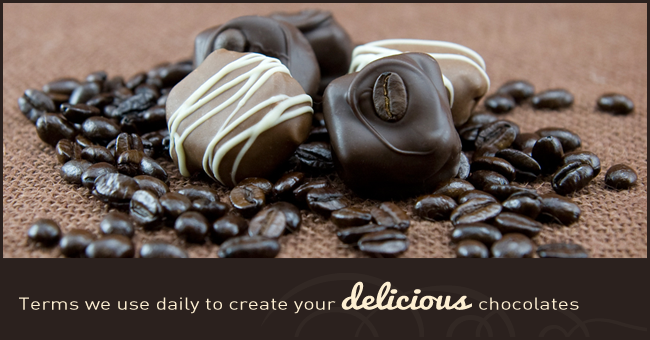 
Here are some terms The Montana Chocolate Company use every day to make the most delightfully delicious confections for you to enjoy at home.

A term used for a cacao plant and also for the unprocessed product (pods) of the cacao plant.

Chocolate liquor is made up of finely ground nib of the cocoa bean. This is technically not yet chocolate. This type of chocolate is also known as unsweetened chocolate and is also referred to chocolate mass or cocoa liquor

Source of all chocolate and cocoa, cocoa beans are found in the pods, (fruit), of the cocoa tree, an evergreen cultivated mainly within twenty degrees north and south of the equator.

Cocoa butter is a complex hard fat made up mostly of triglycerides, it remains firm at room temperature then it contracts as it cools and solidifies. It is ideal for molding.

Between the blossoms of the permanently flowering cocoa tree, we can see fruit at various stages of development. The egg shaped cocoa pods measure between 15 and 30 centimeters and hang from the trunk and the largest branches. Each fruit contains between 30 to 40 beans of about 1 cm in length. Cocoa Powder The result of extracting cocoa butter from cocoa paste.

is used to prepare chocolate drinks or to sprinkle on top of truffles and tarts.

The process step called “conching” reduces the moistness of the cocoa mass and removes volatile acids. At the same time, this step allows for specific aromas and smoothness to be associated with chocolate. Conching is the process where the chocolate is “plowed” back and forth through liquid chocolate which smoothes the chocolate and rounds out the flavor, essential for the flavor, the texture and the overall quality of the chocolate.

Couverture is a term used to describe professional- quality coating chocolate with a high percentage of cocoa butter, at least 32%, and as high as 39% for a good quality couverture. The extra cocoa butter allows the chocolate to form a thinner coating shell than a non-couverture shell.

Dark Chocolate must contain a minimum of 43% of cocoa to be called “dark” according to European norms. A 70% cocoa chocolate is considered to be quite dark while 85% and even 88% cocoa dark chocolates have become quite popular for dark chocolate lovers.

In the early 19th century the Dutchman Coenraad Johannes van Houten discovered that the acid taste of cocoa was neutralized if he added alkali-potash to the nibs before they were roasted. Ever since the end of the 19th century all industrial chocolate makers have practiced this alkalization process to modify the flavor and the color of the final product. Another technical term for alkalization still used today is the dutch process or “dutching”.

Fudge is a type of confectionery, usually extremely rich and often flavored with chocolate. It is made by boiling sugar in milk to a soft-ball stage, and then beating the mixture while it cools so it acquires a smooth creamy consistency.

A ganache is a rich silky chocolate mixture made by combining chopped semi- sweet chocolate and boiling cream and stirring till smooth, (sometimes butter can also be added). The proportions of chocolate to cream vary, depending on the use of the ganache and can be flavored with fruit spices and different liquors. The result is a harmonious balance between the smoothness of the flavor and the intensity of the chocolate.

Another technique for making chocolates consists of placing chocolates in molds to obtain a molded chocolate “shell” that is then filled with one or several unique fillings before being sealed with another layer of chocolate.

The best known kind of eating chocolate. Milk chocolate is made by combining the chocolate liquid, extra cocoa butter, milk or cream, sweetening’s and flavorings. Nibs The kernels of coca beans are usually called “nibs” and are the basic ingredient of which chocolate is made, Sometimes, the original dark and rich nibs are used to add texture to the chocolate bars or chocolate desserts.

Tempering is the process of bringing chocolate to a certain temperature whereby the cocoa butter reaches its most stable crystal form. There are several forms of in which butter can crystalize, only one of which ensures the hardness, shrinking force and gloss of the finished product after it has cooled. If chocolate is melted in the normal way (between 40-45 degrees Celsius) and then left to cool to working temperature, the finished product will not gloss. Proper tempering, followed by proper cooling produces a nice finish and good eating properties.

The botanical description for cocoa. The name “Theobroma” comes from the ancient greek words for “god”(Theo) and “food” (Broma).

A confection made of chocolate (ganache), butter, sugar and sometimes liqueur shaped into balls and often coated with cocoa. Truffles are made by heating a rich blend of butter cream and chocolate, and often a flavoring, delicately shaping it, and enrobing it with a chocolate couverture, (milk, dark or white). Different truffle textures can be created by rolling the center ganache in cocoa powder, powdered sugar or finely chopped nuts. Truffles originated after the exotic French mushroom because of its visual resemblance, either hand rolled or domed with a piped center. Viscosity The measure of the flow characteristics of a melted chocolate.